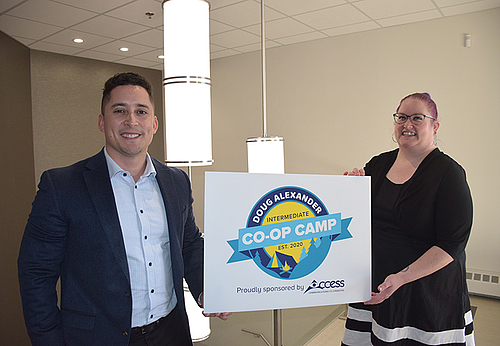 The Saskatchewan Co-operative Youth Program (SCYP), also known as Co-op Camp, is SCA’s summer-long program providing a co-operative and participatory learning experience for young people, co-operative sector staff, and volunteers alike. SCYP is a series of four- and five-day overnight seminars designed for youth ages 12 to 18 to meet new people, develop leadership skills, and learn how to get involved in co-operatives and the community. Access Communications will sponsor the Intermediate level of Co-op Camp, which features sessions on topics like leadership styles, co operative entrepreneurship, and confronting cultural stereotypes. New sessions on technology and media are being jointly developed with Access Communications.

“The support we receive from the co-operative sector never ceases to amaze me,” said Tracey Quiring, Program Officer for the Saskatchewan Co-operative Association. “Our camp provides a positive, safe, and inclusive environment and strives to deliver a memorable summer experience. This partnership with Access will ensure that our camp’s magic continues to reach the next generation of co-operative members, employees, and leaders. And we couldn’t think of a more fitting time for this announcement than National Co-op Week!”

“Co-op Camp leads the way in co-operative youth education, and we’re honoured to sponsor this program while also paying tribute to Doug Alexander’s lifelong commitment to the community,” said Fran Moran, Communications Manager at Access Communications. “Doug believed if everyone did their part, the world would be a better place. Co-op Camp does its part to champion the co-operative movement with young people. We’re excited for the opportunity to help grow SCYP and to bring our expertise on topics like technology and the not-for-profit service co-operatives.”

Doug Alexander was a legendary broadcaster in Saskatchewan and was Community Relations Manager at Access Communications. Doug was also the Board Chair for the Access Communications Children’s Fund, a registered charity dedicated to helping children at risk or in need. Doug championed the importance of community improvement, and proudly supported Co-op Camp. Doug passed away in November 2019.

Access Communications began serving customers in 1978. Since then, we have grown into a province-wide co-operative serving over 235 communities and 170,000 sq. km of rural areas in Saskatchewan. As a not-for-profit co-operative, we invest 100% of our earnings right back into the communities and rural areas where we live and do business.