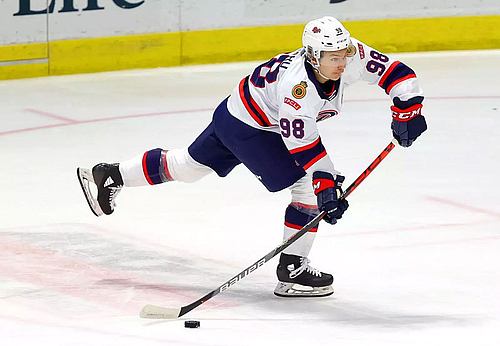 Regina, SK – Access Communications has partnered with the Western Hockey League and the Regina Pats to bring 18 Pats home games to AccessNow TV community channels. The first game is set to air Friday, September 23, as the Regina Pats take on the Moose Jaw Warriors.

“We are excited to announce that AccessNow TV will be home to 18 Pats games this season,” said Tracey Mucha, Community Programming Manager at Access Communications. “We know that fans can’t wait to see what Connor Bedard has in store for his third season, coming fresh off a World Juniors Gold Medal win. Cheering on our local teams brings the community together – and is just another way that Access Communications tells the stories of Saskatchewan.”

“We’re thrilled to begin another season of Pats hockey on AccessNow TV and are thankful for the support we continue to receive from Access Communications,” Regina Pats CEO Gordon Pritchard said. “Access is a huge part of our community here in Regina and has been an excellent partner for both the Pats and the Western Hockey League over the years. We can’t wait to drop the puck on another season of outstanding broadcasts on AccessNow TV.”

“The WHL is pleased to extend our broadcast partnership with Access Communications for the 2022-23 WHL season,” commented WHL Commissioner Ron Robison. “For many years, Access has delivered outstanding coverage in Saskatchewan. WHL fans can once again enjoy WHL hockey on Access, featuring the hometown Regina Pats.”

The AccessNow TV broadcasts will showcase all six of the WHL’s East Division teams, four of which are Saskatchewan-based clubs. The broadcasts will feature such talents as Ryan McNally, Michael Ball, and Daniella Ponticelli on the play-by-play and colour commentary.

The AccessNow TV broadcast schedule for the 2022-23 Regina Pats season is as follows:

Schedule subject to change. Check your local AccessNow TV channel listings for the most up-to-date program times, or visit www.myaccess.ca/pats.

Access Communications Co-operative began serving customers in 1978 and has grown into one of Saskatchewan’s largest telecommunications companies. We deliver exceptional communications and entertainment services to over 235 communities and 200,000 square kilometres of rural areas across our province. As a community-owned, not-for-profit co-operative, our commitment to the community goes beyond providing internet, television, phone, and security services. We dedicate 100% of our earnings to improving the quality of life in the communities and rural areas where we live and do business, primarily through our AccessNow TV community channels, corporate initiatives and fundraising events, and our Children’s Fund charity. Visit myaccess.ca for more information.

About the Regina Pats

Founded in 1917 as the Regina Patricia Hockey Club, the Regina Pats have been a Queen City tradition for more than a century. Named for the Princess Patricia’s Canadian Light Infantry, the team is the oldest major junior hockey franchise in the world that has continuously operated from their original location and used the same name. The Pats are proud members of the Western Hockey League, having won WHL championships in 1974 and 1980 and are four-time Memorial Cup champions, with victories in 1925, 1928, 1930, and 1974. The team was named after the Princess Patricia’s Canadian Light Infantry during the First World War; a history resonates with the fans and community, especially with the coveted Memorial Cup being named to honour Canada’s First World War casualties. In 1977, the team moved from the Regina Exhibition Stadium to the new Agridome, since renamed the Brandt Centre. Most recently, the Pats were the host team for the 2018 Memorial Cup. To learn more about the Pats, call 306-337-1535 or visit www.reginapats.com.

About the Western Hockey League

Regarded as the world’s finest development league for junior hockey players, the Western Hockey League (WHL) head office is based in Calgary, Alberta. The WHL consists of 22 member Clubs with 17 located in Western Canada and five in the U.S. Pacific Northwest. A member of the Canadian Hockey League, the WHL has been a leading supplier of talent for the National Hockey League for over 50 years. The WHL is also the leading provider of hockey scholarships with over 375 graduates each year receiving WHL Scholarships to pursue a post-secondary education of their choice. Each season, WHL players also form the nucleus of Canada’s National Junior Hockey Team.